CBS News Highlights Russell Wilson and Why Not You Foundation

"Russell Wilson asks the important question: Why not you?"

CBS News featured an inspirational interview with the 2014 Super Bowl Champion Russell Wilson on Sunday, September 8, 2019. While the interview highlighted his incredible career accomplishments (after all, he is the highest-paid football player in the NFL), what stood out to us was that his heart is in the work he does with Friends of the Children youth across the country. Below is an excerpt from the article on cbsnews.com, written by James Brown and Alvin Patrick:

It's an August morning after a late, pre-season road game. Most NFL players are still in bed, but Russell Wilson is spending his only day off of the week running sprints and playing games with kids from a Seattle mentorship program.

CBS News special correspondent James Brown asked Wilson, "Why is that so important to you?" 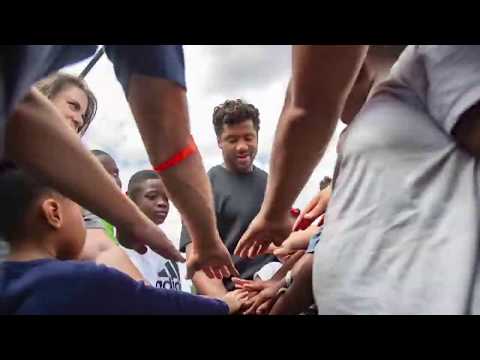 We are incredibly grateful for the Why Not You Foundation's support of our Seattle chapter and our national expansion to reach more children. When we started working with the Why Not You Foundation a few years ago, we were in 7 cities. Now, we just announced our expansion to our 19th location in Tacoma, Wash. Russell and wife Ciara's continued support has made it possible for thousands of children across the country to have a Friend.